Thank you for your patience while we retrieve your images.

For centuries, ever since the first American pioneers started heading southward to find new territories, swamps have been deemed impediments to progress and regarded as second class ecosystems. Believed to harbor evil spirits and dangerous wildlife, the general public has avoided bottomlands because of pervasive misrepresentation and misunderstanding.

This social disconnect has allowed swamps to be logged, drained, and developed in order to make way for golf courses, agriculture, and housing developments. Only 50 years ago, draining bottomlands and wetlands was the very idea of conservation. Today, only a handful of old growth swamps still exist in the United States. More than just flooded woodlands, these ecosystems offer some of the most wild and scenic wildernesses left in the country. It's time to rewrite the public narrative about these backwoods refuges. 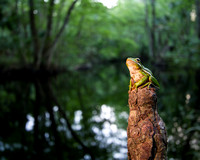