Thank you for your patience while we retrieve your images.

Northern Mozambique has been relatively closed off from the scientific community for the last 50 years following a long battle for independence and the internal warring that ensued in the power vacuum. Today, biologists from around the world hope to uncover the secrets of a varied and biodiverse region in the Niassa Province before the engine of growth and poor land management engulfs this region.

Mozambique's "sky islands" are the numerous inselbergs that rise out of the miombo forest floor, seemingly out of nowhere. Topographically isolated from one another, they contain unique biological conditions that allow for speciation and endemism. Leading the first scientific expedition to high elevation inselbergs of Chitagal, Sanga, and the Njesi Plateau, a team of specialists aims to create a baseline of the life found on these mountainous islands, and in doing so, ultimately help protect the iconic mountains.

This expedition, coordinated by BINCO, was supported by a Royal Geographical Society (with IBG) Neville Shulman challenge award and by the Critical Ecosystem Partnership Fund. 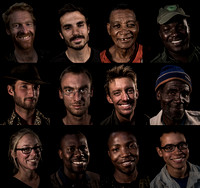